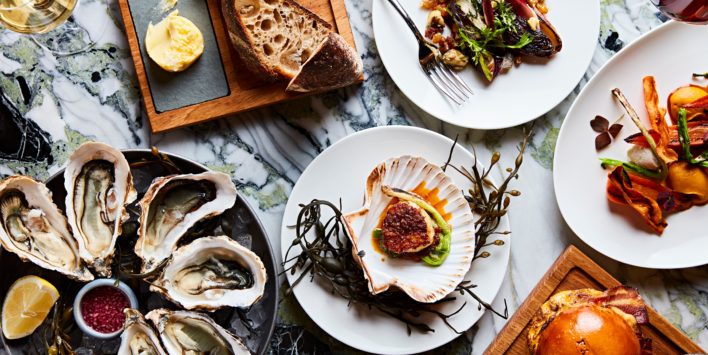 It has been a challenging year for hospitality, to say the least, but it didn’t stop new restaurants from opening up across the capital.

Read on for our guide to some of the best new restaurants that opened in London during 2021.

Bow Street Magistrates Court in Covent Garden, directly opposite the Royal Opera House, has been transformed into a stunning hotel: The Nomad London.

The main restaurant, The Nomad Restaurant, is set in a landscaped atrium with a soaring glass ceiling, flooded with natural light in the day.

Side Hustle is NoMad’s take on the classic British pub setting but with a menu focusing on Southern California’s fresh, Mexican-influenced cuisine.

Sit at the bar, order a margarita and enjoy some of the great tacos on the menu.

The food is from ex-Polpetto chef Florence Knight in one of the most beautiful dining rooms in London.

After two residencies in Soho over the past three years, Chris Leach and David Carter’s Manteca opened as a permanent restaurant in Shoreditch.

The menu focuses on Italian nose-to-tail cooking, hand-rolled pasta and fire-cooked cuts of meat to share.

Nearly a decade after they first opened in Hackney, Rita’s has opened a permanent site in Soho, serving a menu inspired by the owners’ travels across the Americas.

The menu includes duck carnitas taquitos, barbecued beef tartare and a prime cut of steak to share with all the trimmings.

Chelsea institution the Cadogan Arms relaunched in July after an extensive renovation.

James Knappett, of two Michelin-star Kitchen Table in Fitzrovia is culinary director, while in charge of the kitchen day-to-day is The Harwood Arms and The Ledbury alumnus Alex Harper.

A beautiful pub with excellent food.

The El Pastor team launched another site early in the summer in Soho in the space that was once Hix Soho.

The Mexican food is as good as ever but make sure to visit the downstairs bar, “Mezcaleria El Colmillo” for some excellent margaritas.

Kudu Grill is a 50-cover restaurant that centres around the braai – a South African grill using only wood and charcoal.

Menu highlights include duck terrine with biltong scratchings, and sharing dishes such as dry-aged T-bone with beer pickled onions and onion treacle bordelaise.

Ekstedt at the Yard

Ekstedt at the Yard brings the chef’s signature cooking – wood-fired, fermented, cultured – to the UK for the first time.

Run by Chet Sharma, previously at L’Enclume and Moor Hall and most recently development chef with JKS (Gymkhana), Bibi is  influenced by the street carts and roadside cafés of India.

Fallow moved from its pop-up location on Heddon Street to a permanent location in St James’s in the space formerly occupied by Duck & Waffle.

It has been a challenging year for hospitality, to say the least, but it didn’t stop new restaurants from opening…