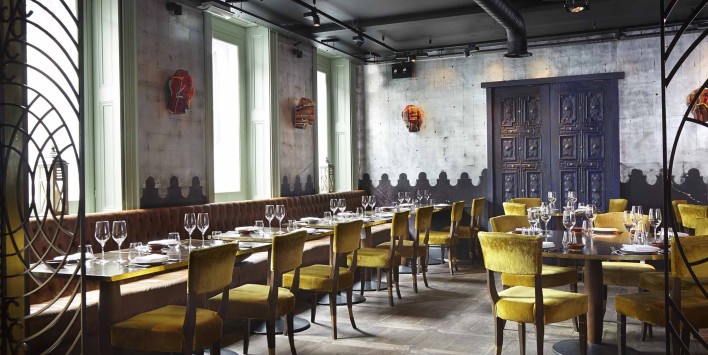 Following on from last month’s November highlights, we are continuing with our monthly post of offering recommendations for where you should visit or have on your radar for the month ahead.

Encompassing new openings and old favourites, pop-up venues, events and everything in between, here are some December highlights for the true bon vivant.

The Experimental Group team are bringing a unique wine bar to the heart of Covent Garden this winter. With a focus on original wines from small producers you can expect new discoveries from the wine world alongside established classics such as Chateau Margaux, Bordeaux.

Read our guide to the best restaurants in Covent garden.

Jackson + Rye restaurant, café and bar is set to open in Soho this December, welcoming guests 7 days a week from 8am until midnight. The American inspired menu will serve seasonal produce in a relaxed dining environment.

Highlights from the brunch menu include creamed grits, flaked almonds, blueberries and maple syrup, a reflection on the New York brunch scene. The bar will serve American cocktails, North American and European wines and a variety of hard shakes and fresh juices.

Ember Yard will open its doors on 3 December 2013, serving an array of Spanish and Italian-inspired smoked and grill dishes. Almost the entire menu will be cooked on an open charcoal fire grill and a number of ingredients will be hot or cold smoked (the hot smoked old spot pork belly sounds delicious).

The basement bar continues the smoked and grilled theme with a selection of innovative cocktails involving the likes of grilled fruit and smoked Maldon salt.

This December, Shoreditch will welcome a slice of Peruvian culture and cuisine in the form of Andina, a ‘picanteria’, brought to you by restaurateur Martin Morales (of ‘Ceviche‘ fame in Soho).

Diners have the choice between open plan dining on the ground floor, The Music Room, the downstairs main dining room, The Ceviche Bar or the Pisco and Chicha Bar.


Green’s Restaurant & Oyster Bar is restoring caviar to the menu for the first time since 2010, with the launch of a new Caviar, Vodka and Champagne Bar.

Available now in the restaurant, the bar will showcase a trio of different caviars, Royal Baerii, Russian Oscietra and Imperial, complimented by Laurent Perrier Champagne and chilled Kaufman Vodka.

Shoryu Ramen in Soho is launching a private dining room this December, which will accommodate up to 14 people, ideal for birthday celebrations and Christmas parties. Shoryu Ramen specialises in Hakata tonkotsu ramen, a thick rich pork soup from Kyushu in Southern Japan.

The urban and contemporary art company, Beautiful Crime, launched a temporary concept store earlier this month on Floral Street, Covent Garden. It is a rare chance for art lovers to purchase unique works from established artists and emerging talent.

Beautiful Crime Concept Store is open until 29 December 2013 and will be hosting various interactive artist sessions; click here for more information on the store and its events.

Floridita’s Rum Shack has just launched its Hot Rum Bar that will keep those winter blues at bay this December. There are 6 winter warming cocktails on the menu that combine traditional festive flavours with Cuban flair. Try the Hot Spiced Tai, a delicious mixture of spiced dark rum, lime, amaretto and clove syrup.

Lanes of London on Park Lane is a new restaurant and bar concept that will showcase London’s international food and drink scene. Drawing inspiration from the many London ‘Lanes’ that offer a variety of world cuisines, head chef Anshu Anghotra and his team will transport you from Britain to India, Lebanon and Vietnam all under one roof.