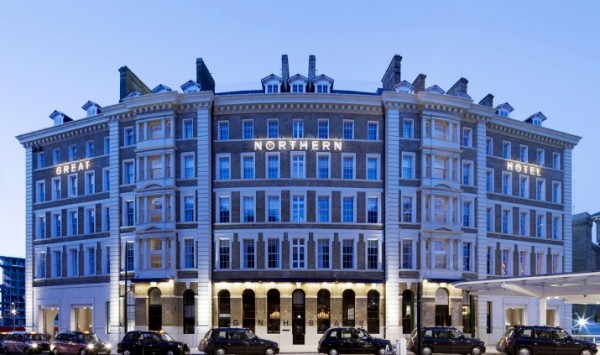 Here we look ahead to the new openings and events to keep on your radar for April 2014. From The Hemingway Bar at The Ritz Paris popping-up at The Connaught to a few new openings in Clerkwenwell and a Krug Champagne event with London’s Philharmonia Orchestra.

Take a step back to a 1960s British seaside scene with a visit to Bonnie Gull Seafood Cafe. Concentrating on sustainable British seafood, the café will offer a selection of shells, rolls, starters and mains.

Think oysters, cockles, lobster, crab, mussels; sure to be popular with seafood lovers, it will be open 7 days a week for lunch and dinner.

Hemingway Bar at The Connaught

The celebrated Hemingway Bar from The Ritz Paris will be taking up residency in The Connaught Bar in Mayfair for one week only.

From 7 to 13 April, two of the leading figures from the international cocktail scene combine to create a special menu, reflecting their respective styles: Colin Field of the Ritz, Paris and Agostino Perrone of The Connaught, London.


Ibérica Farringdon will open in Clerkenwell on 28th April 2014, serving Churros and hot chocolate from the deli, in addition to the a la carte Spanish menu.

Peg and Patriot will open its doors this month in The Town Hall Hotel in Bethnal Green serving innovative cocktails created with house spirits produced on-site. Their creations are certainly for the adventurous; try unique concoctions such as the Marmite vodka martini.

The Cut Outs at Tate Modern

From 17th April until 7th September The Tate Modern will play host to the most comprehensive exhibition to date of the paper cut outs from one of the pioneering figures of modern art, Henri Matisse. The paper cut outs, dating between 1943 and 1954, mark the final chapter in his long and remarkable artistic career.

Curated by Nicholas Cullinan of The Metropolitan Museum of Art, New York, and Nicholas Serota of The Tate, this is a major exhibition not to be missed.

For one week only, join the prestigious Champagne house and London’s Philharmonia Orchestra in their celebration of the annual recreation of Krug Grande Cuvée.

The pop-up exhibition in Shoreditch will see the Philharmonia Orchestra performing Stravinsky’s The Rite of Spring – guests will receive 2 glasses of the recreated Krug Grande Cuvée and the full musical experience.

The Future of Meat at Hawksmoor Guildhall

Head over to Hawksmoor Guildhall on Saturday 5th April to learn about our consumer habits when it comes to meat, sustainability and what we’ll be eating in 100 years’ time.

The talk will feature Richard Turner of Hawksmoor, Tim Wilson of The Ginger Pig and Philip Lymberry, author of Farmageddon; tickets cost £40 and include brunch and a Bloody Mary.

The wines in question have been created by innovative vintners and will be paired with Tuscan delights such as fresh tagliatelle, kid goat ragu, duck ragu and Tuscan fennel seed sausages and lentils.

Enjoy a city break this Easter with a stay at the Great Northern Hotel for just £199 (add £45 for your partner).

From Good Friday until Easter Monday guests are invited to savour the simple classics served at the Plum + Spilt Milk thanks to breakfast and dinner restaurant credits included in the offer, washed down with a chocolate martini at the GNH Bar.

In an impressive Grade II listed Victorian building on Kensington High Street, One Kensington has just opened its doors with head chef Massimiliano Blasone at the helm serving international cuisine and light dishes.

The space is elegant with modern glass chandeliers and sleek crescent leather booths creating a convivial atmosphere. Our highlight was the Tagliolini with pesto, almonds, crab and tarragon.

In the wake of the resounding success of Dabbous, you will be pleased to know that Ollie Dabbous and Oskar Kinberg launched Barnyard last month, a rustic walk-in only restaurant.

With a focus on wholesome and reasonably priced fare, you can expect sausage rolls with piccalilli, roast beef on toast with horseradish buttermilk and drinks such as the Hedgerow shandy, a sloe gin, cider, pink grapefruit and tonic concoction.

Pay a visit to Bibendum after April 15 to celebrate its menu relaunch in honour of head chef Matthew Harris’s 20th year at the helm.

The new menu and daily changing prix fixe will showcase his classic French cooking, robust and unfussy, made from the finest seasonal British produce.

The Chelsea institution Big Easy recently opened its doors on Maiden Lane introducing the much-loved ‘crabshack’ to the West End.

Expect American fresh-smoked BBQ food, including pork and beef cuts and fresh lobsters sourced from Nova Scotia on display in an impressive fish tank that houses 2,000 of the tasty crustaceans.

Note: This post is meant to be informative and not a review of the featured items. Nobody has paid to be featured – we have included a selection of new openings and events that we believe our readers would like to hear about.