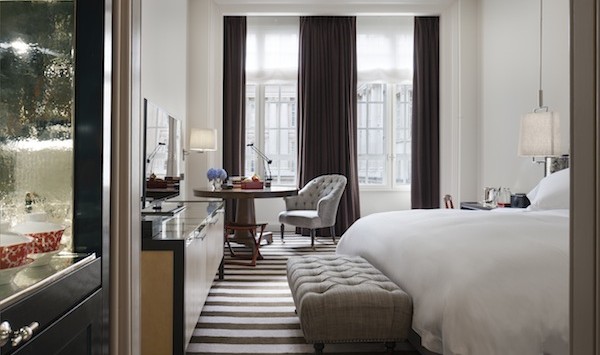 London is one of the greatest cities in the world, with fantastic luxury hotels to match its reputation – read our guide to the best luxury hotels in London.

The Connaught, sitting neatly on the corner of Mount Street in Mayfair, combines its splendour with impeccable service and traditional English grandeur. The style of the hotel is a restrained glamour and elegance with fantastic restaurant and bar offerings. 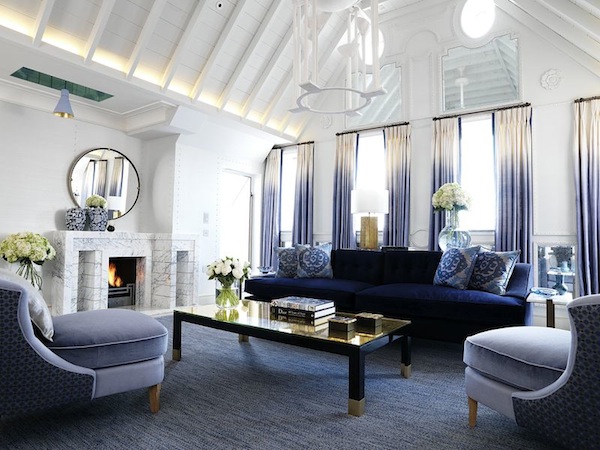 Hélène Darroze at The Connaught has 2 Michelin stars, offering fine French haute cuisine, while its two bars, the glamorous Connaught Bar situated towards the back of the hotel with its art deco flare and the warm, homely Coburg Bar with its heavy fabrics and open fire, are both excellent places to enjoy a martini in London and features in our choice of the best bars in London.


Claridge’s is perhaps best known for its popularity amongst royalty, dignitaries and the glitterati. It is also a shining example of the grace of art deco with its beautifully crafted interior and fin de siècle elegance. 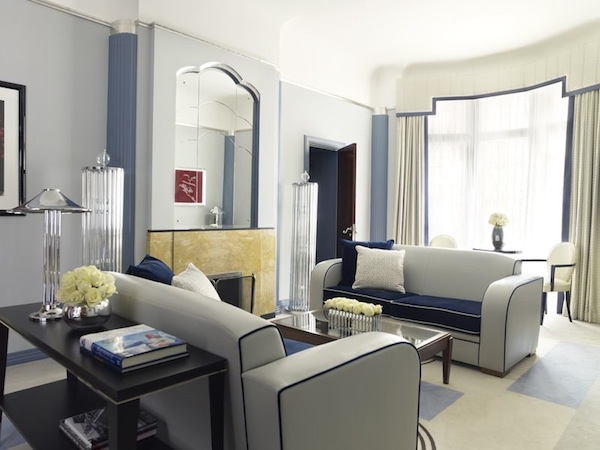 Whether you are taking afternoon tea in The Foyer, dining in Simon Rogan’s Fera at Claridge’s or sipping on champagne in Claridge’s Bar, you will marvel at the flawless style and service.

The Corinthia Hotel, near Embankment


The Corinthia hotel is the ultimate destination for those looking for luxury, style and relaxation. You will find it located just off from Trafalgar Square and even at first glimpse it radiates glamour.

As you enter the hotel you will become aware of the striking chandelier crafted out of Baccarat crystal dangling above you, which sets the tone for one of the best luxury hotels in London.

The rooms are large and stylish, there are two very good restaurants, a lovely bar, The Bassoon Bar, where the bar stretches out from a piano, and possibly the best spa in London.

The ESPA, cascading three floors beneath the hotel, is as luxurious as you could imagine – it is encased in black Italian marble and offers an equally impressive range of treatments and one of the best spas in London.

The Rosewood London is the latest luxury hotel to open in London (October 2013) at the former site of the Chancery Court Hotel in Holborn. The hotel is truly stunning – stylish, elegant and spacious rooms, gorgeous public areas and a warm, welcoming and chic cocktail bar. 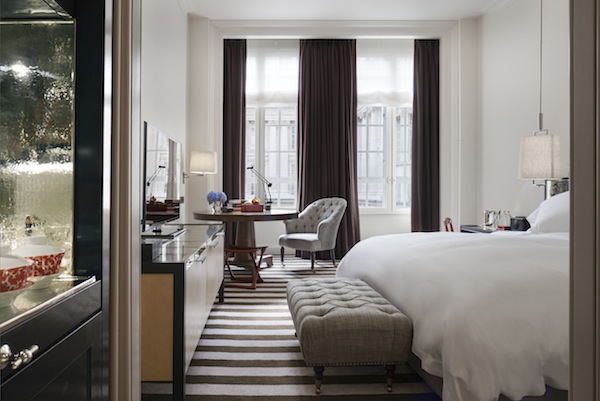 The Rosewood London’s restaurant, the Mirror Room, is overseen by Michelin starred chef Bjorn van der Horst, and a second restaurant, The Holborn Dining Room, will open in early 2014.


The Langham is conveniently placed just off the fanfare of Oxford Street, where the style of the hotel is grand with stylish flourishes throughout. 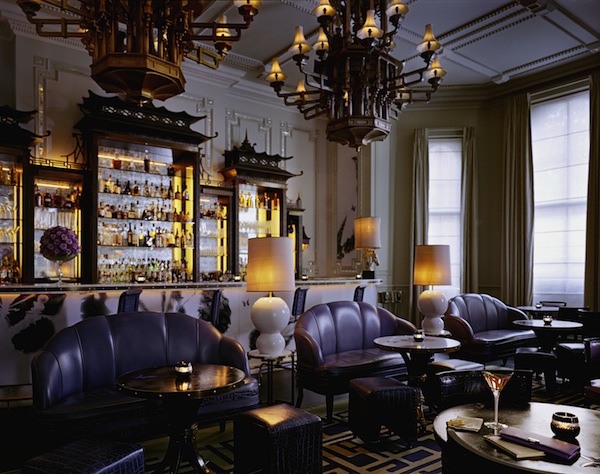 The dining options are also notable, with Roux at the Landau and the beautiful yet creative afternoon tea in the Palm Court. There is also Artesian pictured above, a cocktail bar serving a fabulous selection of drinks.

The Dorchester exudes traditional glamour and a quintessential British elegance, and it is easy to see why it is so popular. The style is unmistakably thirties’ glamour with a modern twist. 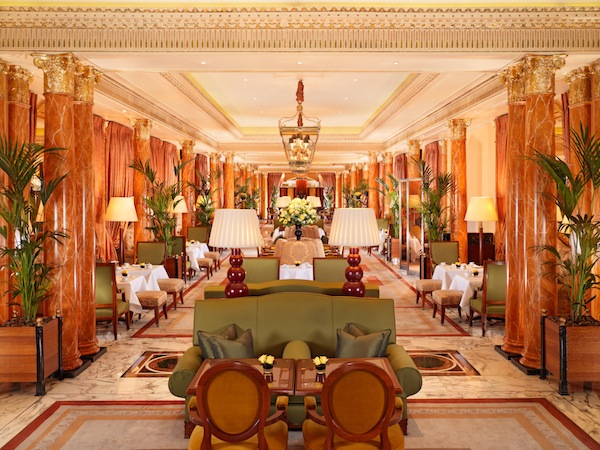 The bedrooms delight with their mixture of delicate floral touches and traditional British grace. The Dorchester has three top quality restaurants including China Tang, The Grill at the Dorchester, and the 3 Michelin Starred Alain Ducasse at The Dorchester.

The Four Seasons Park Lane re-opened in 2011 after a full transformation. The rooftop spa has spectacular views of London, and the restaurant, Amaranto, offers Italian-inspired food with international flavours and a dark, sexy bar area.

The St Pancras Renaissance Hotel at St Pancras International Station is an architectural marvel, standing ceremoniously with a sweeping driveway set back from Euston Road in London’s King’s cross area. 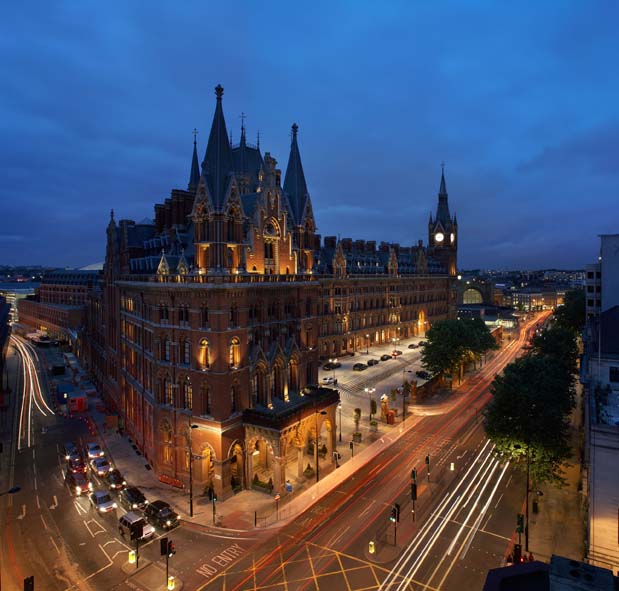 The London hotel features 245 guest rooms split between two buildings – 207 rooms are located in a new annexe and 38 beautifully restored suites are found in the original building. The St Pancras Renaissance Hotel oozes history from every corner, which is its biggest asset.


The newly opened Bulgari Hotel in the middle of Knightsbridge has a lavish and sumptuous feel with a decadent blend of marble and silver throughout. The Bulgari has one of London’s best luxury cinemas, seating forty-seven in pure luxury.

The Bulgari Spa is also worth a visit, most notably the beautiful swimming pool and eleven treatment rooms.

Brown’s Hotel is a traditional British Hotel in the heart of Mayfair, but holds a modern, stylish bar on the ground floor. The Donovan Bar is cool, stylish, intimate and a haven for fashionistas.

The walls are adorned with Terence Donovan’s iconic black and white prints, which adds a contemporary twist to the history of the surroundings. Brown’s Hotel also offers contemporary British dining in the form of Hix Mayfair from Mark Hix.

The Mandarin Oriental has a prime address in Knightsbridge with views over Hyde Park and with Harrods and Harvey Nichols moments away. The hotel features restaurants from two superstar chefs, with Bar Boulud from the US’s Daniel Boulud and our own Heston Blumenthal.

Avoid the waitlists for his Fat Duck restaurant in Bray and try his special cooking techniques in the heart of London.

The Savoy is an institution on London’s hotel scene and caused quite a scene when it re-emerged a couple of years ago with a new look. The American Bar is a huge draw for visitors, but walk to the rear of the hotel where you’ll fine the grand Beaufort Bar, which has live singers on certain nights.

Café Royal opened its doors on 3rd December 2012, but its official full opening occurs in the summer of 2013, the culmination of a four-year transformation of a former London grand dame.

The stunning hotel retains the heritage of the original building with its imposing staircase and opulent design features.

There are currently 159 rooms and suites (including six historic suites), a restaurant under the direction of Andrew Turner, 2 bars (including the spectacular Grill Room), soon to be followed by a private members’ club (with its own more formal restaurant) and a holistic well-being centre.

The Best Luxury Hotels in London by Bon Vivant

Book your stay at one of London’s top 5 star hotels and access a range of VIP added benefits (free breakfast, upgrades and $100 restaurant credits).  No deposit required and you pay the hotel on check-out.

If you liked this feature, read about our favourite hotel suites and London’s best boutique hotels.

The Connaught, Mayfair The Connaught, sitting neatly on the corner of Mount Street in Mayfair, combines its splendour with impeccable…