This is a guest post from one of my favourite food bloggers, Dominic Rowntree from Samphire and Salsify – visit his blog as he eats (and drinks) his way around London’s best restaurants.

After the success of their first Michelin starred restaurant in Fitzrovia, Lima have taken their vibrant Peruvian dishes and opened up a second one, this time in Floral Street, Covent Garden. 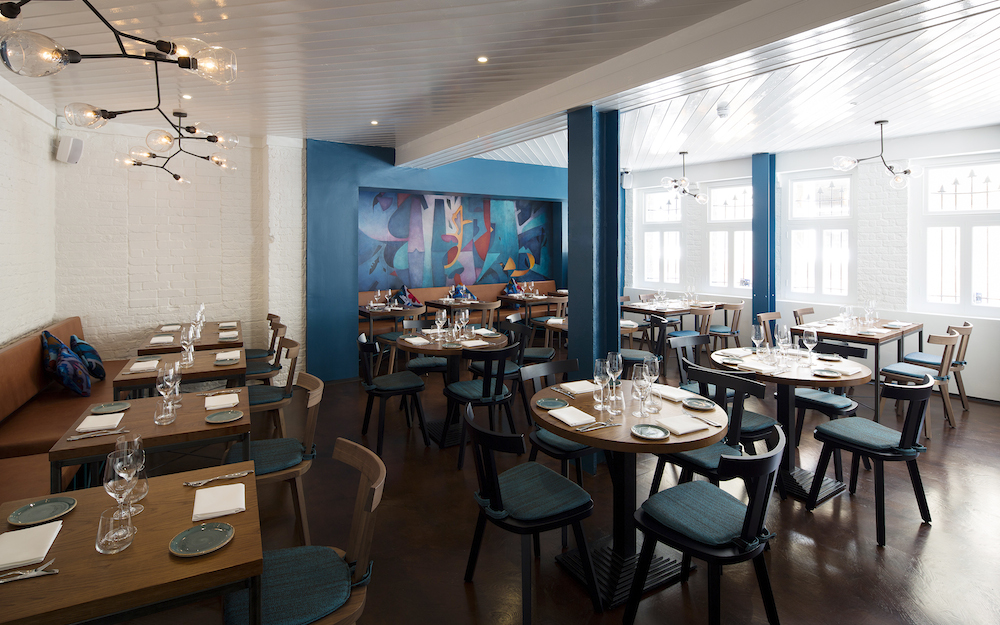 We were seated at a slightly less desirable table by the entrance to Lima Floral, but after a bit of to-ing and fro-ing we were moved around the corner to the main dining room which was far more pleasant as the atmosphere was really lively. There’s also a rather charming bar in the basement which is worth remembering.

Some colourful bread with a Peruvian yoghurt dip got things off to a tasty start. I’ve no idea what makes the bread purple and green but it’s not something I’ve seen done before and the flavour was great.

To start, my gentleman companion and I shared three starters and all were as beautifully presented as I’d hoped for. The sea bream ceviche (£10) has become one of their signature dishes and I can see why.

I’ve never really been fond of ceviche due to the fact it leaves my mouth feeling like it’s done ten rounds with a bag of limes, but here it was a far more subtle affair. The fish was tender and the addition of some crispy onions added texture.

The dry Andean potato (£7) was surprisingly exciting for a vegetarian dish. It was essentially a dry potato stew topped with gooey sheep’s cheese which had been sprinkled with onion ash – it was bloody lovely.

The tuna causa (£10), basically a tuna tartar, was only let down by the yellow potato, which although looked fun and vibrant, provided very little flavour. The tartar, however, was quite the opposite.

For main, my gentleman companion went for the beef sudado (£24) which was seared entrecôte in a soupy broth that was filled with white quinoa. The meat was soft and tender while the sauce beneath it had a subtle spice that was really lovely.

I went for the lamb rump (£22) which was served with a side dish of more of that delicious potato concoction from the starter. It was refreshing to see a chunk of meat so perfectly cooked that hadn’t been sous vide-d to oblivion.

Puddings ended things on a real high: the dulce de leche, beetroot and dry limo chilli pepper (£6) was a brilliant balancing act of flavours – the pepper helped even out all that sweetness.

The Palo Blanco Peru Cocao with oat and wood sorrel (£6) was basically a posh chocolate mousse that was utterly divine (and not at all sickly), which was helped by the sprigs of fresh mint which we sprinkled over the top.

I liked Lima Floral Street an awful lot – the food was not only easy on the eye but seriously flavourful too. Our dinner was helped along by our charming waiter (a chap called Hector) who described the dishes with the sort of passion that is needed when you’re dealing with food that plebs like me are totally unfamiliar with. Bravo, I say.

Dominic dined as a guest of Lima Floral – read our editorial policy here.

Read some of Bon Vivant’s other restaurant reviews including Fera at Claridge’s.

After the success of their first Michelin starred restaurant in Fitzrovia, Lima have taken their vibrant Peruvian dishes and opened…