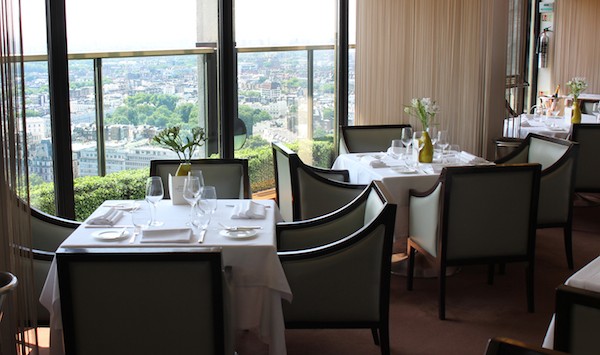 Sky high dining seems to have taken over London’s restaurant scene over the last few years. Duck and Waffle made a huge splash when it opened in 2010 and it continues to delight diners today.

The Shard towers above the city offering 3 separate restaurants, including Northern Chinese delicacies at Hutong and modern British fare at Aqua Shard.

With so many new restaurants, it seems we have forgotten that Galvin at Windows has been offering London as a side plate since 2006. 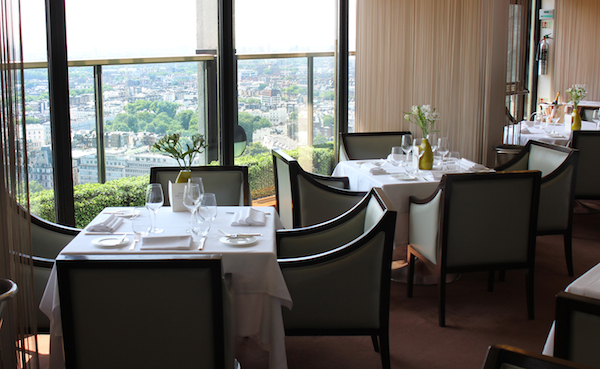 Situated on the 28th floor of the London Hilton on Park Lane, Galvin at Windows has a fantastic location, but the downside is that you have to enter through the hotel and make your way past hoards of hotel guests and conference attendees.

Arriving for dinner just as the clocks were turning back and the nights were becoming darker earlier, we entered a beautifully lit bar that was bursting with a sexy, stylish atmosphere – last year’s refurbishment making a big difference.

The restaurant is designed to make the most of the view, as you would hope and expect, but retains the air of a formal dining space that is serious about the food.

The Menu Prestige, with 3 courses for £68, offers a selection of 5 or 6 options per course, or the degustation menu is available for £95.

While trying to decide between the roasted fillet of Cornish cod with shellfish, paella, chorizo & squid and the Poached fillet of halibut with herb potato crust, golden enoki, shellfish & dashi broth (‘lovely’, according to my guest), I did a U-turn and went for the fillet of Cumbrian beef ‘Rossini’. With foie gras. And truffle.

Possibly the most indulgent and rich dish on any menu, this was every bit the French classic. You have to give gluttony some credit.

Tarte tatin is one of my favourite desserts, so when in Rome (or equally in a French restaurant in London), it was the only option. This was a caramelised pear version instead of the more traditional apple, accompanied by Tahitian vanilla ice cream.

Where Galvin at Windows really shines is with its exceptional service levels – the guidance of charming GM, Fred Sirieix, permeates through all staff members. Service strikes the perfect balance between attentive and unobtrusive, guiding us through the evening without interrupting any conversations.

Perhaps its biggest selling point and its biggest weakness (for regular London diners, at least), Galvin at Windows is very much a restaurant for special occasions. But with a set lunch menu for £29, it can offer Michelin starred food and a stellar view for a very reasonable price.

If you enjoyed this review of Galvin at Windows read our reviews of London’s other sky high restaurants, including Hutong and Duck and Waffle.

The Shard towers above the city offering 3 separate restaurants, including Northern Chinese delicacies at Hutong and modern British fare…