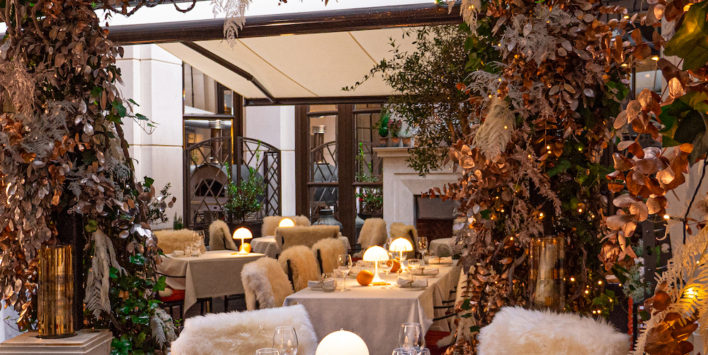 Bob Bob Ricard relaunches in The City, the Ferragamo family’s Il Borro opens in Mayfair, Hawksmoor opens in Covent Garden and much more.

Read our guide to the restaurants opening in London this month.

Owner Leonid Shutov wanted to bring the City site more in line with the Soho original and has brought in the former Star at Harome chef Ben Hobson to take charge of the menu.

Not only will it be the largest Hawksmoor restaurant, it will also house their most ambitious bar to date, The Lowback, with its own terrace.

Occupying an eco-friendly floating pavilion, Hawksmoor Wood Wharf will seat 160 in the restaurant, 22 in the private dining room, 120 in The Lowback and 60 alfresco across two waterside terraces.

Taking the space on Berkeley Street once held by Nobu, Il Borro Tuscan Bistro is a high-end Italian restaurant from the Il Borro hotel and estate in Tuscany, owned by the Ferragamo family.

Expect excellent Tuscan cuisine and a focus on good quality wines from their estate.

November will see the arrival of Le Petit Beefbar in London, an “elegant yet cosy” take on Riccardo Giradui’s existing restaurants around the world.

The Chelsea site will add to a collection including sites in Mykonos, Dubai, Mirabel, and Monte-Carlo.

Giradui describes the concept as a “temple of beef” where the meat is sourced from Australia, Japan, and the US.

The Garden at Corinthia London

Sign me up for the tartiflette and the braised venison ragout.

Coravin will open its first wine bar and retail pop-up on 2 November, bringing its signature wine by the glass concept to Mayfair.

The Coravin Wine & Bubbles Bar will have a 300-strong list and every bottle will be available by the glass.

There will be more than 50 champagnes, including some of the world’s most coveted and respected vintages.

Dai Chi is the latest spot from the founders of Italo-Japanese restaurant Angelina in Dalston and will bring Osaka’s kushikatsu dining culture (kushi = skewer, katsu = deep-fried) to London.

Offering their interpretation of the traditional Japanese deep-fried skewers – also known as kushiage – Dai Chi will serve its kushiage omakase-style, with the option of tasting menus centred around carabineiro red prawns and A5 wagyu tenderloin with white truffle.

After two residencies in Soho over the past three years, Chris Leach and David Carter’s Manteca is finally getting a permanent restaurant, this time in Shoreditch, with a menu that combines Italian cuisine with British ingredients.

Taking place on Thursday, Friday and Saturday nights from 7.30pm at Le Comptoir Robuchon in Mayfair, guests at Les Nuits Robuchon will be welcomed with a roster of curated DJs and live music alongside a menu that focuses on simple, light, small plates, honouring Robuchon’s inventive French cuisine.

Opening at the new Westin London City hotel, located right on the river on the Northbank of the Thames, Hithe + Seek is a new wine bar with fantastic views to the Tate Modern and The Globe.

The restaurant will be full of beautiful and rare pieces (from Henry Moore, Howard Hodgkin and Bridget Riley amongst others), as well as Tom’s unique and limited edition designs which will be for sale at the end of the pop-up run too.

For fans of printed restaurant guides, The Good Food Guide has been given a new lease of life by CODE Hospitality.

The Good Food Guide, which turned 70 this year, will be back digitally and in print. Watch this space.