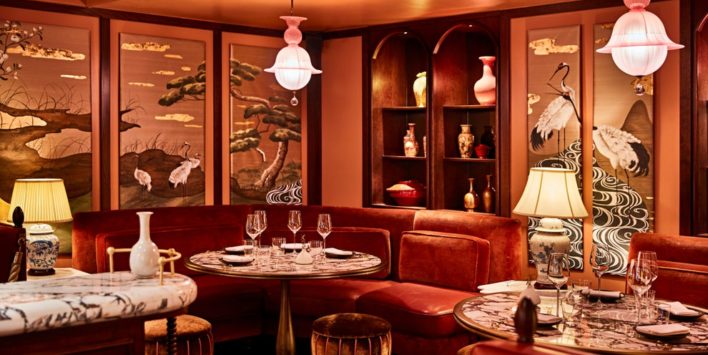 The Connaught Grill and The Delaunay Counter reopen, the world’s best pastry chef opens at The Berkeley, Gordon Ramsay opens another restaurant at The Savoy and Blacklock opens in Covent Garden.

Read our guide to the best restaurants that have opened in London so far this year.

The Connaught hotel brought back its legendary restaurant The Connaught Grill just before the pandemic and it reopens today, 3 March.

Located on the ground floor of the hotel, the intimate 46-seat restaurant is under the direction of renowned chef Jean-Georges Vongerichten taking a modern take on grill room classics, including a ‘Pie of the Day’ menu with traditional favourites such as venison, chicken and seabass en croute.

The Connaught Grill is open for dinner from Wednesday-Saturday and lunch on Sunday.

The Counter at The Delaunay

The relaunched Counter at The Delaunay offers a menu that will remind you of the Alps with dishes such as traditional fondue and tarte flambées, Viennese hot dogs, Charcuterie and Cheese plates, Souffle Suisee and ‘Tartiflette’.

A new selection of cocktails has been created such as the ‘Pink Grapefruit Spritz’ with Belsazar rosè, elderflower and grapefruit soda and the ‘Counterside’ with Tanquery, kirsch, mint, cucumber, lime and sugar.

Cedric Grolet at The Berkeley

World-renowned pastry chef Cedric Grolet has arrived in London, opening his first UK patisserie (and the first outside France) at The Berkeley hotel in Knightsbridge.

Cedric Grolet at The Berkeley offers a £135 tasting menu comprising sweet fruits, pastries and floral tarts alongside a pastry and dessert takeaway menu.

Restaurant 1890 by Gordon Ramsay opened at The Savoy in February.

Taking its name from the year that Georges Auguste Escoffier joined The Savoy, Restaurant 1890 offers an intimate experience, opening for dinner only and seating 26 guests.

The tasting menu is seasonal modern French with European influences, priced at £110 per person, with wine pairing options.

Taking over the Bar Boulud space at Mandarin Oriental Hyde Park, The Aubrey is described as ‘an eccentric Izakaya’ with two distinctive bar experiences and accompanying Japanese cuisine.

It is the first UK venture of Maximal Concepts, an international restaurant group with its roots in Hong Kong, who have partnered with Mandarin Oriental in both Hong Kong and London.

Upstairs at The George

While The George pub launched late last year, March sees the launch of the main restaurant, Upstairs at The George from chef James Knappett (of two Michelin-starred Kitchen Table), JKS Restaurants (Gymkhana among other hits) and publican Dominic Jacobs.

Upstairs at The George will offer pub classics with a focus on seasonal and responsibly sourced produce.

Blacklock has opened the doors to its fourth restaurant, this time in Covent Garden.

Alongside the usual menu of chops and cuts of meat, new to the menu at Blacklock Covent Garden is an excellent Steak and Stilton Pie.

The much-loved Sunday roast will also be on the menu with a 55-day aged beef rump, Cornish lamb leg or Middlewhite pork loin.

For dessert, there’s a huge ice cream sundae along with a Welsh rarebit.

Sweeties at The Standard London

Situated on the 10th floor of The Standard hotel, Sweeties offers a menu of naturally mood-boosting cocktails with a particular focus on feel-good ingredients.

Sweeties is open from 5pm on Wednesday to Saturday each week.

The Cubitt House launches its next pub this month in Notting Hill.

The Princess Royal has a menu from group chef director Ben Tish with pub-style dishes made in his Mediterranean cooking style.

Brothers Fin and Lorcan Spiteri will open Caravel, a 40-cover restaurant and bar in a converted barge moored on Regent’s Canal in early March.

Provisions Wine & Cheese is opening a new wine and cheese shop on Hackney Road in March.

Read our guide to the best wine shops.

La Goccia, the Italian restaurant from Petersham Nurseries in Covent Garden, opened a new cocktail bar with a menu of botanical-inspired drinks.

Try the Pear Tree (rum with pear juice, tonka bean and cloves) or the Smoked Orange with notes of Aperol and amaro combined with mezcal.

Open for breakfast, lunch, dinner and weekend brunch Mildreds is split across two-floors, serving 110 covers alongside a private dining room which can accommodate up to 8 guests.

Read our guide to the best restaurants that have opened in London so far this year. The Connaught Grill The…

Read our guide to the best restaurants that have opened in London so far this year. The Connaught Grill The…