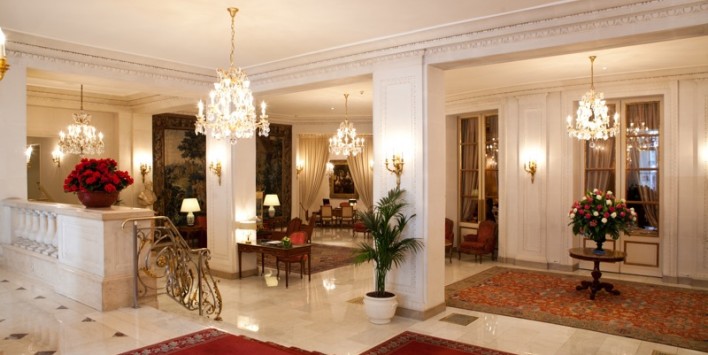 White marble floors glisten throughout the lobby and every Louis XIV style incidental table is adorned with a unique arrangement of freshly cut flowers. 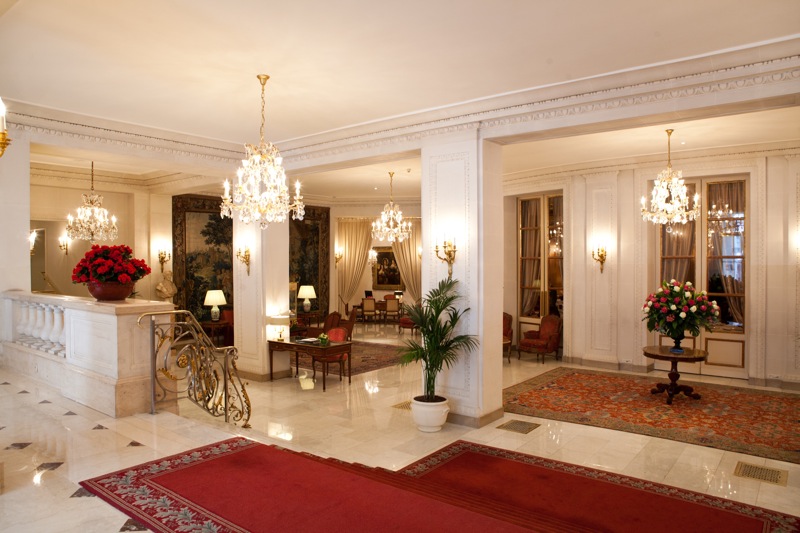 There is a garden at the back of the hotel that is large enough to be considered a park by most urban standards. There is a feeling of space and serenity and there is no chance that any of the other guests could overhear your clandestine conversations over a glass of wine in the sunshine.

The hotel opened in 1925 and was recently classed as a ‘Palace’ by the French Ministry of Tourism’s rating system for exceptional luxury hotels.

The staff are impeccably professional and take immense pride in the hotel, from guest relations who greet guests as they arrive to uniformed maids who plump the cushions of the sofas as soon as you leave your seat to hit the shops and museums which lie just outside the front doors of the hotel.

The rooms are decorated in a traditional style with chintz and silk curtains to match the chairs, crystal chandeliers and Persian carpets. Bathrooms are spacious with Hermes and Anne Semonin products and each room has a distinct entrance area, separate from the main room, which is a great benefit for those with exploding suitcases.

While the rooms have satellite flat screen TVs, we would have appreciated a separate music player or iPod dock, and the daily charge for internet access is something I hope all hotels will soon abolish.

The hotel has a resident white cat that roams the hallways and keeps a watchful eye over the staff and the guests, although he wasn’t to be seen on our visit.

Le Bristol Paris is a self-contained wonderland in which you can spend days without ever getting bored.  There is an opulent La Prairie spa where the treatment rooms look out into the peaceful garden, and a rooftop pool designed in the style of boat with views of the Paris rooftops, which also includes a rooftop sundeck and a hammam. 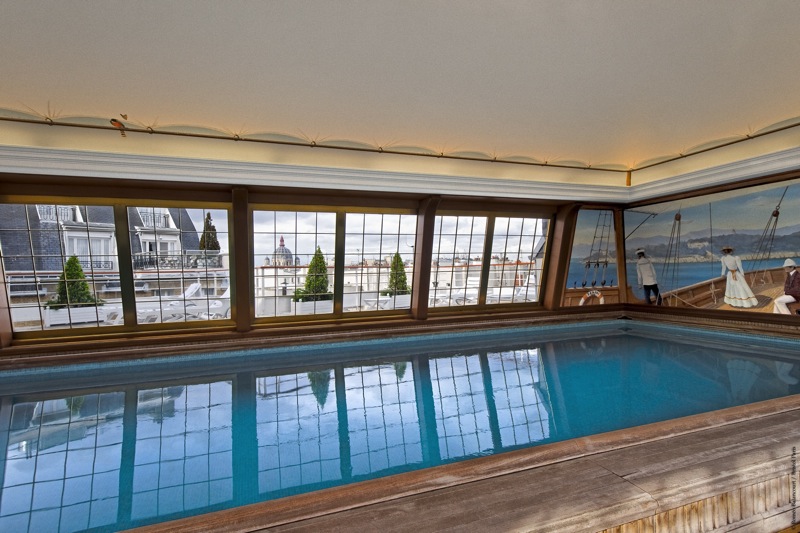 There is a bar serving cocktails, light meals and afternoon tea to a backdrop of a live harpist and if that isn’t enough amusement, the hotel is located on Paris’s finest shopping street – rue Faubourg Saint-Honore – and a stone’s throw from the Louvre and the Champs Elysee for those inclined to engage in some old fashioned tourism.

Le Bristol Paris’s crowning jewel is its culinary offerings:  Those with time and calories to spare are invited for a gastronomic feast at ‘Epicure’ from chef Eric Frechon, where the dining room is formal but inviting with views of the inner courtyard, with a 19th century marble fireplace and large French doors leading out into the trellised garden. 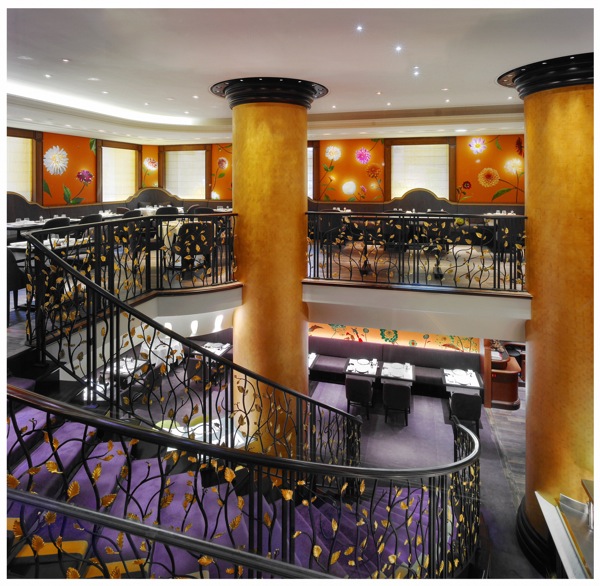 We opted for dinner at the less formal ‘114 Faubourg’, which opened in 2009, where the surroundings of the restaurant were playful and there was a buzz of an upscale brasserie in the air.  Somewhat unexpectedly for the hotel’s second restaurant, plates of exquisitely prepared food kept appearing, with all the tastes one would expect in a Michelin-starred restaurant but served with none of the fuss or pretence.

Of particular note was a cote de boeuf Normande for two, which was served on a bed of smouldering herbs alongside the creamiest mashed potatoes. The wine list is heavily French but covers a wide variety of regions and price points.  Breakfast is served in the dining room, in the garden (weather permitting), and most decadently, in bed.

I opted for the third option and had the basket of delicacies crafted by the in-house pastry chef delivered to my room in the morning.  Just when you thought life couldn’t get any better, it did.

Would you like your own expert travel concierge to arrange every aspect of your next holiday to Le Bristol Paris or any other deatination with access to exclusive rates and privileges? Email us to find out more.