Alyn Williams at The Westbury 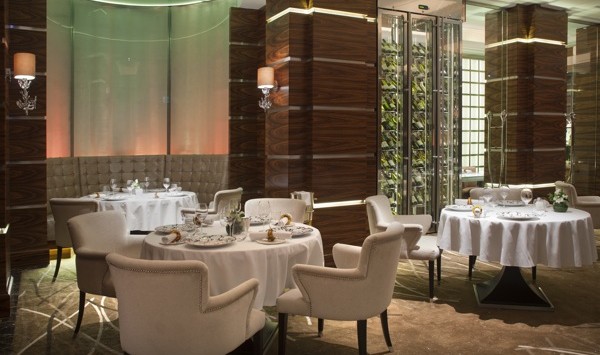 Alyn Williams at The Westbury opened to great acclaim at the end of 2011 – here we try out one of London’s most recent Michelin starred restaurants.

On a quiet night in January we zipped through The Westbury hotel and straight into the more glamorous bar of the hotel’s new flagship restaurant, Alyn Williams. The restaurant is oriented around a private room encased by floor-to-ceiling glass wine cabinets.

The décor at Alyn Williams at The Westbury is luxurious and chic; wood panelling, muted hues of creams and browns and a plush silver-threaded carpet (although get the interior designer back to match up the pattern).

The atmosphere was hushed and perhaps a little cold, certainly as a result of dining out on an unseasonal mid-week night when sensible people were home digesting the festive excess. 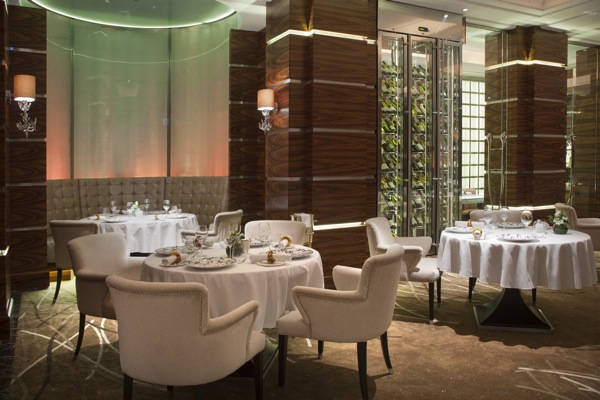 Given the sybaritic tendencies of my companion, we eschewed the three-course á la carte (£45) and opted for the seven-course tasting menu, which was very reasonably priced (£55) for fine dining in London and indeed Mayfair.

The menus at Alyn William at The Westbury list out the primary ingredients of the dish (for example “Cod/seaweed butter/beach vegetables/cockles”) in a similar form to Marcus Wareing at the Berkeley, perhaps unsurprising given Alyn was head chef there in a previous incarnation.

The staff at Alyn Williams at The Westbury were warm, courteous and informative, offering to swap dishes between the menus should we wish, and after one or two substitutions we were off.

We started with canapés over a glass of bubbles at the table:  truffle arancini were delicious and just as good as those at Marcus Wareing. Fourme d’Ambert gougeres were light as air while packing a cheesy punch.

Deep fried sea bass belly with tom yum jelly on prawn crackers were unusual. Bread is made in house and was near perfect, including star anise rolls, lavash flatbread and (a slightly heavy) potato bread, served with an excellent whipped caraway seed butter.

A particular highlight on the menu at Alyn Williams at The Westbury was a deconstructed onion soup served in a martini glass along with crab meat, melting onion and jellied beef with a potato wafer with gruyere on the side – a very innovative take on a familiar dish. T

he main course allowed a choice between Cotswold chicken with smoked egg and charred leek or Devon beef sirloin.

My companion opted for the latter and, before I even had a chance to sample, reported that it was very flavoursome. I had been too distracted with my Cotswold chicken, served with a perfect smoked egg yolk that sauced the meat as I pierced it with my fork. While the meat was verging on the edge of translucency, the dish was as tasty as it was beautiful.

Courses were perfectly balanced and despite being rather full, we foolishly opted to add in a cheese course. The trolley was excellent as was the knowledge of our waiter, who was very accommodating and offered to bring my favourite cheese (Vacherin) from the kitchen.

No need at all and my tour of goat’s cheese was beautifully presented on slate with crackers or bread (we were too full to accept the latter) accompanied by chutney and a honey gel.

Desserts reached similarly heady heights: pre-dessert of crème Catalan with pear granita was subtle and refreshing (although the pine sugar was perhaps a little too subtle) and dessert of chocolate mousse with caramel and peanut butter consisted of a rich, dense chocolate “finger” with a caramel core and a peanut butter ice cream. Heavenly.

This is slick, elegant and contemporary cooking, as handsome as it is delicious.

We managed to finish off dinner with truffles and then rolled out of the restaurant. Alyn Williams at The Westbury may not have opened with a prestigious named chef on the door but this is certainly prestigious cooking and prestige will certainly follow Alyn Williams if he continues in this fashion.

In the meantime, read some of our best London content including our guide to the best afternoon tea, the best boutique clothes shops in London or where to sample the city’s best coffee.